Currently residing in the wilds of Fairfield County, Connecticut, he grew up in New Hampshire and as such has never quite gotten used to sales tax. His first published work was a short poem printed by a local newspaper at the tender age of six. Him, that is. The newspaper was considerably more well-established. He has continued writing since, including the YA science fiction novel Migon. His most recent publication was in the Fairfield Scribes' own award-winning anthology When To Now with "Try Again."

​When not writing code at the day job, writing fiction after hours, or visiting Ren Faires in a vacuum-tube-bedecked top hat, P.C. can be found trying frantically to catch up on sleep. He is pondering a trip into Mad Science simply so as to be able to build a device to slow the rotation of the planet and create the 28-hour day for this purpose. Donations welcome.

3-Question Interview with P.C. Keeler
​about his short story "The Water Bane"
to be published in
​DON'T BE A HERO: A VILLAINTHOLOGY

"The Water Bane" - Terrible events start to occur when a woman moves into a new house. It might be her abusive ex who's sabotaging her fresh start, or perhaps something even more sinister at work.

3-Question Interview with P.C. Keeler
​about his short story "Monstrous Practices"
published in
​Imagining Monsters: A Collection of Short Stories Inspired by Frankenstein 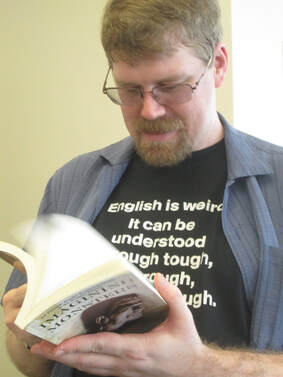 "Monstrous Practices" - When a boy takes a careless risk and breaks his leg,
he has to turn to "traditional" medicines that are centuries removed
from the hospital procedures of today.

I actually was thinking of Teen Wolf when I wrote 'Monstrous Practices.' In a setting where the werewolves are generally the good guys, I thought of the idea of showing the outcome of a 'bad ending' - as in, the government actually DOES find out about the Fearful Hiding Monsters and follows through with the whole 'experimentation' thing... and have it end up with a positive resolution anyway, with society getting the expected benefits and (not much mentioned in the story) the original monsters being able to come out into the open and thus able to sue the pants off of the people who violated their civil rights like that.

The haven for me isn't so much a physical location as a writing environment - specifically, pencil and paper. I'm on a computer all day for work, and the physical act of moving a pencil on the page is a sufficiently different situation that it's a whole new writing world.

I've got two novels in progress, and I'm hoping to get one or the other done sometime in the reasonably near future. We'll see how time permits, though.

3-Question Interview with P.C. Keeler
​about his short story "Try Again"
published in When to Now: A Time Travel Anthology 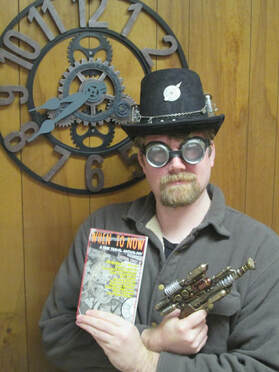 "Try Again" - A boy is given the power to change the past,
​but that doesn't mean he'll get it right the first time around.
​

Election 2016. It obviously was a cruel practical joke by someone very amoral who had a very, very long time to set things up.

To the world of Respite, home of the miniature dragons known as Migons, in the far, far future (BUY THIS BOOK). A developing world with technology masquerading as magic sounds like an excellent place to go (BUY THIS BOOK)!

​​I've recently published a YA Fantasy/SF novel by the name of Migon, where a young boy named Gyndri is transformed into a dragon and charged with saving civilization as he knows it. So, no pressure on him. I've also got a post-Internet crime/adventure novel in the works, currently going by the title Lucky Break, and an urban fantasy novel named Felt Green featuring a divinely-gifted pool player who prefers hard work over gifts.
Back to "Behind the Scenes"