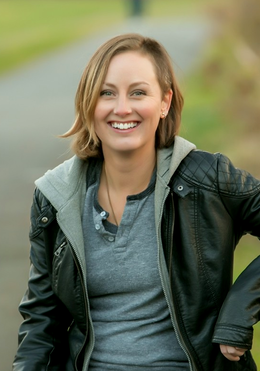 Leslie Burton-López is your typical angsty, tortured soul, whose only escape is the words her fists pound out on the keyboard as she hurls curses at the demons driving her on this mortal coil.

Just kidding. She is just a normal, boring nerd-pie who loves contact sports and Reddit. Most of what she writes does not involve demons, as such, but some of it is semi-autobiographical, semi-funny and only semi-good.

A recent transplant from California to Connecticut, Leslie’s literary career is as dry as the state she hails from. During her college days, she was an editor for Watershed, a collection of short stories and poems, with a total readership base of about eight people. After graduating, she co-authored the Spanish textbook ¡Chevere! bemoaned by students at a several universities for a few years. Then she started her company, Every Page Marketing, which focuses on scintillatingly dull and horrifyingly banal writing for business proposals, grants and other must-read works. And she actually enjoys it (see earlier reference to "nerd-pie").

3-Question Interview with Leslie Burton-López
​about her short story "Baggage"
published in When to Now: A Time Travel Anthology

"Baggage" - After Maggie's mother dies, her mysterious aunt steps in to help raise her.
​

I like the idea of do-overs. Think how much different life would be if we all got a few solid do-overs. Seriously. Think. About. It.

​Being a decent person is exhausting. I am considering a run at villainy – though I would need a cool name. Thoughts?
Back to Authors