“From service in the armed forces to Egyptian gods to a witty form letter from Santa to the kids, Ed Ahern covers a wide expanse of ground in his collection, Irregular Images, in topics, forms, and tones. As he says of the animals in ‘Boarders,’ there’s a ‘surprising amount of room at the inn.’ Enjoy the fun and philosophy!”
Laurel S. Peterson
Poet Laureate
Norwalk, CT 2016 - 2019

​“Edward's poetry is characterised by honesty and integrity. He has the ability to reflect on experience and share emotion succinctly. His writing invariably secures empathy and respect, and commands the full attention of the reader. I have admired his work for many years and I am sure that you will enjoy this collection.”
John Stocks
Poetry Editor
​Bewildering Stories Magazine

​“Ed Ahern’s poems are at once playful and somber. They embrace life in its totality. The poet is precise, self-effacing, nimble, equally unafraid to live joyfully and to lift the curtains that lead to the shadows. The result here is a collection of poems written by a poet who is glad to be alive despite life’s disappointments and frailties and who makes us glad he is alive. Time spent with this book is well-rewarded.”
Emerson Gilmore
Author of The Leesburg Poems
​and To Alice and Her Cancer: A Chronicle

​“Ed Ahern has given us a collection of one hundred poems. Read one or several each day and this volume will last a while. But some will last longer than awhile for they will stick with you like burrs you collect in your walks through the thickets of life.”
​Ray Rauth
Wilton Chapter Coordinator
Connecticut Poetry Society

​“The themes of Ed Ahern’s Irregular Images are nothing short of momentous—lust for life, transience, mortality. They are wrung through his short, quartz-hard poems with a force that sometimes attains to that of the Hopkinsian ‘ooze of oil / Crushed.’ A recurrent motif in Ed’s work is the hunt, which, even as it pins the deer or the pheasant in the cross hairs, catches the poet himself in the lights, the frozen quarry within our larger viewing. Before long, we the readers are right there with him, hunters and hunted, ourselves swamped by the pervasive ache and terror of an impending blackout. Grim? Yes, but also immeasurably liberating.”
Ralph Nazareth
Author of Ferrying Secrets
​and co-author of Dropping Death

3-Question Interview with Edward Ahern
​about poetry and Irregular Images

​
​You didn't start publishing poetry until several years after your retirement, and I'm sure readers would like to know what prompted you to pick up the pen at age 70. What originally drew you to poetry, and what continues to inspire you?

I'd written a few sincere but inept love poems in earlier years, but had no formal training in poetry, nor experience writing it. One of my editorial assignments in my late sixties was to rate poems, three or four a week. After a hundred or so poems I thought I couldn't versify much worse than some of the published poems and began to try. I went through the usual progression of awful to poor to adequate, getting published more and more as I went along. Poetry enables me to express a mood without a plot, and I enjoy the intricate word dances that poetry requires.
​
​You are extremely prolific at producing both fiction and poetry - what appeals to you about each creative form?

There's surprisingly few hybrid authors who write both poetry and fiction, but I think that writing poetry helps with the flow and rhythm of fiction writing. I love storytelling, which fiction lets me do, and I love poetry for its ability to uncover feelings we've hidden or are uncomfortable with. I don't have trouble concocting ideas for both forms, and suffer from laziness rather than writer's block, so the flow of poems and stories never dries up. Some better than others of course.​​ 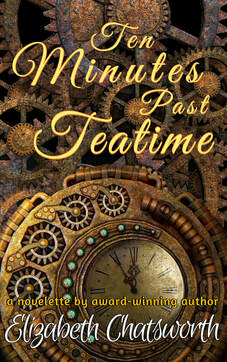 A Victorian spinster-scientist and a Viking shield-maiden find passion and danger in dark-age Ireland.
​
1896: Forty-three-year-old scientist Miss Minerva Minett is determined to become the first female member of an exclusive inventor’s club. To win their annual membership competition, she invents a time-traveling submersible, and launches her vessel into the Irish sea for a quick trip to the dark ages. But when she sinks a Viking longship, accidentally joins a monastery raid, and falls into the arms of a grizzled shield-maiden, she discovers that time may not be on her side.


Ten Minutes Past Teatime is live on Amazon in print and eBook!!! Buy your copy today by going HERE.

I wanted to write a story about two women, each a warrior in their own way, who connect across time.

​If time travel were a reality, when/where would you go and why?

I’d travel to the Great Exhibition in 1851. It was held in the Crystal Palace in Hyde Park, London, and attracted six million visitors. I’d love to wander the exhibits, reveling in the excitement of the crowd viewing the most magnificent arts, crafts, and inventions of the time.

​I’m writing the sequel to my award-winning steampunk rom-com, The Brass Queen, and a very British space opera set in the same universe. If you’d like to be the first to receive exclusive news, giveaways, and more, please visit my website at www.elizabethchatsworth.com.
​
​When to Now: A Time Travel Anthology - Released October 2018!
​ 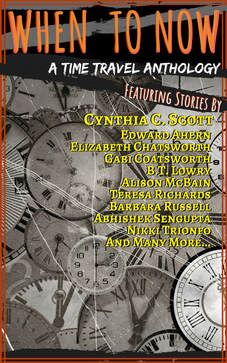 ​From the first popularization of the time travel genre with H.G. Wells' The Time Machine, to cult books such as Slaughterhouse-Five and A Wrinkle in Time, time travel has long fascinated readers of science fiction and fantasy. The premise can be absurd, such as The Restaurant at the End of the Universe, or filled with adventure, like The Chronicles of Narnia. Characters can have a love story over the ages, such as The Time Traveler's Wife or travel far into a dystopian future, like Planet of the Apes.

The Fairfield Scribes' new anthology When to Now: A Time Travel Anthology has something to interest every reader, from a steampunk story that follows a Victorian time traveler back to Viking times, to a daughter who’s trying to figure out her mother’s murder and how it relates to her mother’s research into time travel. There's a touching tale about woman who gave up her son many years ago, and again has to face the trauma that changed her life. And our feature story follows the life of a young girl who learns that a single time traveler can’t change the most important event in her past.

Plus there are many, many more brilliant stories contained in the pages of When to Now - eighteen up-and-coming authors have been brought together to create a fantastic anthology that will thrill all readers of speculative fiction.

When to Now: A Time Travel Anthology is live on Amazon in print and eBook!!! Buy your copy today by going HERE.

When to Now: Awards and Recognitions
​

Update: The stories and this anthology have been picking up steam recently! Three of the stories have currently won/been nominated for awards, and the anthology as a whole has won top place in a state competition. The recognitions are as follows:

For the anthology - 1st place winner in the editing category of the CT Press Club Awards.

There may be more news on the anthology and stories in the near future, so stay tuned!
​

​For the inside scoop on what it was like to be the lead editor of the anthology, and also the stories BEHIND the stories, check out these author and editor blog posts: