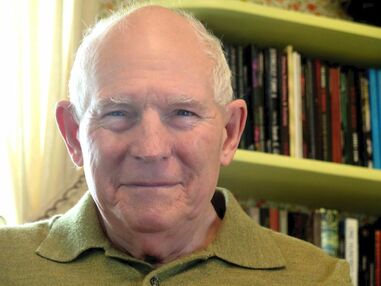 Edward Ahern sometimes detours into literary fiction, but he's best known as a poet and innovative genre writer. He's tucked away several awards and honorable mentions for over two hundred poems and stories and four books. The poems and stories have appeared in a dozen countries and, counting reprints, over three hundred publications. His stories can be listened to through Audible. Ed started writing fiction at sixty-seven, and poetry at seventy.

His editorial skills are based on a degree in journalism from the University of Illinois and extensive experience at the Providence Journal. Ed’s been honing the skills for several years at Bewildering Stories, where he serves on the review board and as review editor with a staff of five. (Bewildering Stories is widely known for the author-friendly quality of its critiques.) Ed is a member of several writing groups, including the Fairfield Scribes, where he’s known for his tough-love comments.

He has his original wife, but advises that after more than fifty years together they are both out of warranty. Two children and five grandchildren serve as affection focus and money drain.

His work career after university has been an enjoyably demented hopscotch game. U.S. Navy officer (diver and bomb disarmer); reporter for the Providence Journal; intelligence officer living in Germany and Japan; international sales and marketing executive at a Canadian paper company (twenty- three years, seventy four countries visited, MBA from NYU); same job for the company that also owns the New England Patriots; and retirement into writing like hell to make up for lost time.

3-Question Interview with Edward Ahern
​about his short story "The Spilled Greyhound"
to be published in
​DON'T BE A HERO: A VILLAINTHOLOGY

"The Spilled Greyhound" - When a bartender meets an intriguing woman at his workplace and saves her from a creep, he's unprepared for the consequences of his white knight action.

3-Question Interview with Edward Ahern
​about his short story "The Chorus from the Hive"
published in
​Imagining Monsters: A Collection of Short Stories Inspired by Frankenstein 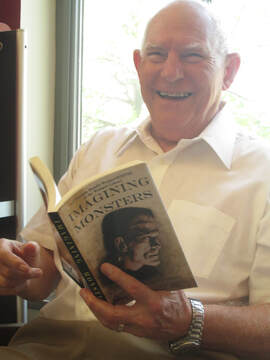 "The Chorus from the Hive" - A university researcher decides to live with a colony of insects in order to truly understand their thinking.
​
Aside from Frankenstein, where did you draw inspiration for your story?

I try not to use the overburdened tropes - werewolf, vampire, etc. or at least to  put a fresh spin on them. My story for the anthology involves termites, which is about as untropy as I could think of.

Libraries have successfully reinvented themselves as resource and community centers, and Westport does an excellent job of this. I use libraries to interact with writers and readers, and to take out materials. But I write in isolation and in three quarters of a century, haven't written a story or poem inside library walls. Don't take that as a recommendation, it's just how I write.

My usual output is two stories and two poems a month, and that's not apt to change. I have one novel in limbo that will probably die there, and another about a third of the way completed that I should focus on and finish. But my gerbil mind gets distracted.

3-Question Interview with Edward Ahern
​about his short stories "A Winter's Day" and "The Service Call"
published in When to Now: A Time Travel Anthology 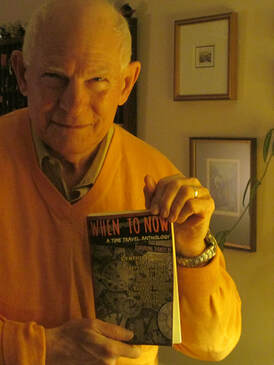 "A Winter's Day" - Peter's cousin Rob has been cryogenically frozen until a cure can be found for his terminal illness. But Rob's able to come back every decade to visit his aging relatives, much to their chagrin.
​
​"The Service Call" - Bryce kills his wife, but he is subscribed to a "Do Over" service that lets him take it back
​- if only technical support can help him figure out how to make it work!

​What or who inspired you to write these stories?

I don't blame anyone or anything else for the exercise of my vices. My inspiration is swamp gas that feels good when it's released.

Always hear about a run of salmon two days after it's over. Need the previous week back again so I can drive up to Canada and catch the beginning of the run.
​
What's next on the horizon for you?

​On the horizon means it's not here yet. My near-sighted focus is on what I've started but not yet finished. Have a closet full of that stuff.
Back to "Behind the Scenes"