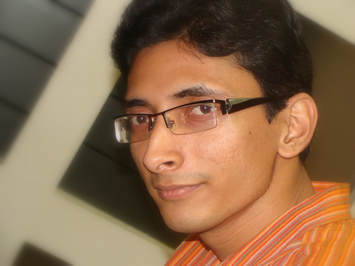 Abhishek Sengupta is imaginary. Mostly, people would want to believe that he writes fiction & poetry which borders on Surrealism and Magical Realism, and is stuck inside a window in Kolkata, India, but he knows none of it is true. He doesn’t exist. Only his imaginary writing does, and have appeared or are forthcoming in FLAPPERHOUSE, Bete Noire, Aurealis, Outlook Springs and others. According to a rumor doing its rounds, he is also a 2018 SFPA Rhysling Nominee, but it may be nothing more than a myth. If you’re gifted, however, you may also imagine him on Twitter @AbhishekSWrites or in his hypothetical website - www.abhishek-sengupta.com.

3-Question Interview with Abhishek Sengupta
​about his short story "The Swing"
published in When to Now: A Time Travel Anthology

​"The Swing" - A poetic and surrealist story where a girl uses death to live.
​

The people who have Alzheimer's. Memory and the deconstruction of time as nothing more than a personal experience is my primary preoccupation here.

I'd click the "surprise me" button on the time machine, given that there isn't a stated jetlag involved.

​Getting my magic realism novel dealing with enforced disappearance published in a way that the rarely discussed subject presented reaches the maximum number of audience around the globe.
Back to Authors