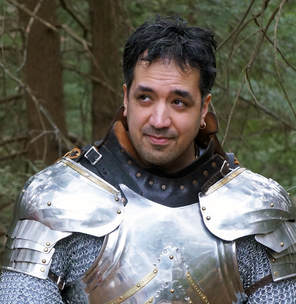 Roberto Calas is an author of fantasy, historical fantasy, and horror. He lives in Sandy Hook, Connecticut and has twelve-year-old twins, a boy and a girl. He is represented by Byrd Leavell of Waxman Leavell.

His serial trilogy (The Scourge) is about a 14th century knight fighting his way through a demon-infested England to reunite with the woman he loves. And every bit of it is true except for the made up parts.

If you prefer epic fantasy, Roberto’s series, The Beast of Maug Maurai might be just the thing for you. In this series published by Westmarch, a dispirited officer in the King’s Army must lead a band of misfit soldiers into a forest to slay a marauding monster.

If you have any interest in The Hundred Years War or Neal Stephenson’s Foreworld universe, he was commissioned to write a novella called Kingdom of Glass for Amazon’s Kindle Worlds program. For Amazon’s StoryFront, Roberto wrote a short story set in his The Scourge universe. And, most recently, another of Roberto’s short stories (also set in The Scourge universe) was published in the upcoming animal anthology, “Tails of the Apocalypse.”

Roberto is the former co-owner and current consultant for Strongblade, a company that designs and sells swords, armor and historical replicas. In addition to physical art, he is an accomplished artist in the two-dimensional arena. His digital creations have graced the book covers of writers such as Scott James Magner, Stant Litore, and Melissa F. Olson.

Want to know more about him? He flips any coin he sees that is tails up; he plays a mean game of Pictionary; he has a pilot’s license; he can juggle really damn well; and with the amount of evidence his friends have, he could never, ever run for President.
Next: Mae Baum
Back to Authors