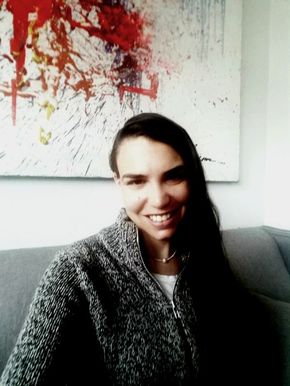 ​Rebecca Green never thought she'd be writing an entire YA book based around hockey. Her interest in the sport mostly stemmed from watching The Mighty Ducks and being told girls couldn't play hockey. But when she attended Oberlin, she finally joined a team and the rest, as they say, is history.

Her day job is mobile marketing; she's a hardcore geek and proud of it. Although one of her majors in college was history, she is quite happy living in the present day and being surrounded by oodles of fun technology.

After a deliberately unspecified number of years of living in the Big Apple, Rebecca moved across the country and into the mountains, where she can pursue her love of skiing, which she's been doing since she was two.  Although she definitely misses having a 24-hour Indian restaurant within a minute of her new home.

She's a hardcore foodie and hardcore anti-coffeesnob (yes, it's one word). As long as it's made of caffeine, she will probably drink it. The craziest thing she's ever eaten is bugs, and she hated the feeling of their little legs on her tongue. Yuck.

As a general rule she will try anything once, from food to sports to any adventure life throws at her, as long as it (probably) won't kill her. At least… not right away.​
Back to Authors