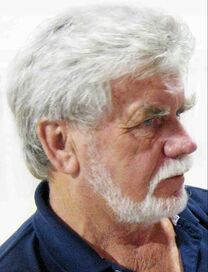 Ken McBeath was born in Cochin, India; brought up in Cullen, Banffshire, Scotland – magic wee fishing village; did an apprenticeship in high-tech electronics in Edinburgh – bored witless, so became a paratrooper for three years in the Territorial Army (i.e. British Militia).

Swapped his soldering iron for a sledgehammer – joined British Petroleum and went oil drilling in the Arabian Gulf and the Libyan Desert.

Married, two sons.  Studied geology at Aberdeen University, then moved to the deep gold mines in South Africa. Four years later, after a bit of the roof fell on him 8,000 feet underground, transferred to Rhodesia to work in the open air, prospecting for gold in the middle of the civil war there. Lovely country, despite the snakes. Interesting times, too.

Came to Canada in 1979 and settled down in Perth, Ontario with his long-suffering (54 years so far) wife May, and sons. On retirement, May and he moved to Comox, Vancouver Island, to live quietly.

Contract work, gold exploration in Suriname, South America, home to the biggest, baddest dugout canoes you can imagine (125 h.p. outboard on a 55' long dugout!!).
​
Short stories have won the National Capital (Ottawa) Short Story Contest (twice) and the Writer’s Digest Popular Fiction 2008 (Mystery/Crime), plus some placed and some featured in Short Lists and Long Lists.  First ever (and only) poem earned a Highly Commended in the National Capital Contest.

3-Question Interview with Ken McBeath
​about his short story "The Green Keeper"
to be published in
​DON'T BE A HERO: A VILLAINTHOLOGY

Next: Stephanie Miraglia
Back to Authors