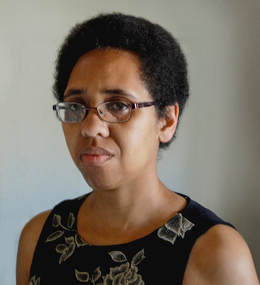 Cynthia C. Scott has been a writer ever since she was a teenager and doesn't recall a time when she didn't want to write. Her work has appeared in Glint Literary Journal, Copperfield Review, Flyleaf Journal, Graze Magazine, Strange Horizons, and others. She has a Creative Writing degree from San Francisco State University. She still lives in her hometown of Richmond, CA. with six cats and books. Currently she is a book reviewer for the website Bookbrowse.com.

​3-Question Interview with Cynthia C. Scott,
winner of the Fairfield Scribes' 2018 Feature Story Contest
about her short story "Ruby's Paradox"
published in When to Now: A Time Travel Anthology
​

"Ruby's Paradox" - A young girl's life changes when a stranger appears and offers her knowledge of the future.
​

"Ruby's Paradox" was supposed to be a part of a larger series of time traveling novels about a futuristic group that goes back in time to rescue artifacts and information that were lost after a cataclymic and apocalyptic war. I'd become a fan of the series Doctor Who and I fell in love with the idea of writing about time travel, which was a subject I'd never really considered before as a storytelling device. I eventually abandoned that idea––though what I'm working on now still involves elements of time travel––but wrote "Ruby's Paradox" because I wanted to write about paradoxes and the ethics of time travel.

I don't even travel in the present, so I can't imagine traveling in the past or future! It would definitely not be in the past, unless it's Ancient Egypt. That might be interesting for a day trip. We live in an era where even freedom of travel for African Americans or POC in general can be fraught with danger. The idea of traveling through time and space can create interesting, storytelling challenges when your characters are POC, which is another reason why I wrote "Ruby's Paradox."

I'm working on a series of sci-fi novels that feature elements of time and space travel called The Book of Dreams. Imagine if you mixed Doctor Who, Star Trek, and the X-Files together, then you'd get The Book of Dreams. I've already completed the first novel in the series and I'll be working on the others soon. They're fun stories (or at least I hope they're fun) that deal with cultural issues, like appropriation and what it truly means to be an ally.​

​For an inside look at what it was like to be the winner of the 2018 Feature Story Contest for When to Now, check out Cynthia's blog post HERE.